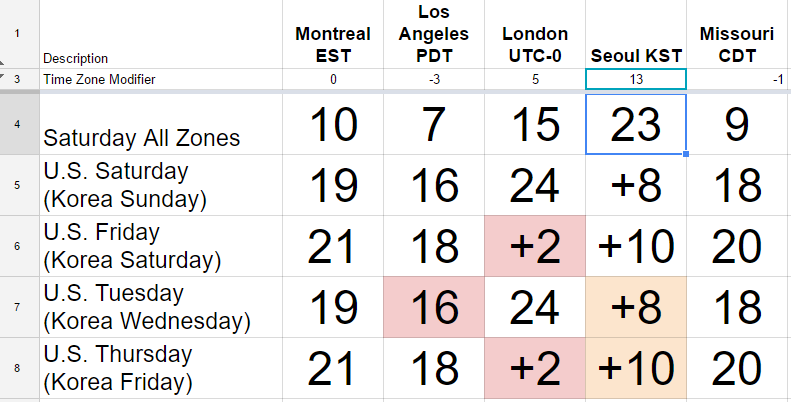 In the KakaoTalk Korean/English exchange group, the idea of doing audio conversation practices came up, and we have been trying to work out times that worked out for everyone. We had participants from Korea, U.S./Canada, and England. We thought that this would be pretty simple, but at the crux of the problem is this phenomenon:

We could find two workable time periods for Saturdays, and squeeze out limited opportunities for weekday early morning or late evenings, but that’s about it.

Another interesting thing is that the bulk of participants are not in the U.S./Canada, and instead in England. The unfortunate thing is that England’s time and Korea’s time are very much not compatible. The way it has been turning out, Korea and England gaspingly scratch the edges of the normal day (midnight/early morning) between the two of them, and the western hemisphere sits very comfortably right in the middle of that arrangement, during the ideal golden time (6pm-9pm)

This finding runs counter to my experience calling Korea. Calling Korea has been actually pretty easy. Call them in the late afternoon from LA, and it’s morning there. What’s the difference?

Well, those calls were for work, so I could do them during the 9am-5pm window. Once the activity is for hobby, it is no longer possible to have them during work hours, and the window of opportunity narrows down significantly. Could we extend this thought to claim that the earth was (unfortunately) shaped to foster corporate global exchange across the Pacific, but not so much individual exchange/communications, and more acutely between Europe and the Far East?