I was feeling sick and going over my past reddit posts just to kill time until it’s time to sleep (to not mess up my sleep schedule), and found this post from a year ago that I think still makes sense. 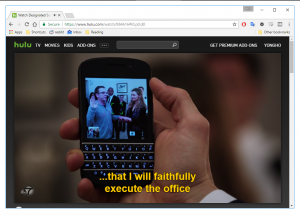 After 15 episodes in, Designated Survivor is feeling like a comical satire of the Trump administration. In some parts, there are parallel connections, and in some others, if we were to get inside Trump supporters’ minds, this is how they would imagine themselves – fighting the good fight to protect an embattled, post-apocalyptic America. In the 2000 movie The Cell, detectives enter a psychopath’s mind, materialized into a virtual-reality-of-sorts through a machine, where there are horrific depictions of their depraved thoughts, but in some scenes also some of them are represented beautifully because that’s how the psychopath feels about it internally. Now apply that mechanism to Trump and their supporters.

For starters, he was never elected to public office prior to the presidency, and only became president due to a technicality. His swearing-in ceremony was the “largest in history”, and those present really believed in the legitimacy of his presidency.

He has led a holy crusade against the ravaging mainstream media, who keeps running hit pieces on dear leader. The press secretary is misspeaking-machine-on-wheels (phase 1) and then improves and just outright lies to everyone on everything (phase 2) (Although for Trump it’s Phase 2 first)