I was looking at numbers for #CA39 in the Orange County Registrar, assuming that it would have the quickest turnaround. Then I found a Twitter account that was showing numbers consistently lower than the OC Registrar, and it hit me: each county registrar reports only on their own county’s results. So CA39 shows up in three county’s reports separately.

I see the Korean Press was only looking at OC numbers as well, as they reported the difference as 55% vs 45% (even at the time of the reporting last night, the district-wide difference was actually 53/47).

Still, Republican candidate Young Kim holds a lead over Gil Cisneros, at 51.3 vs 48.7% (4,000 votes difference) without including the late ballots. It’s not impossible, but it will be pretty tough to reverse the trend in late ballots. 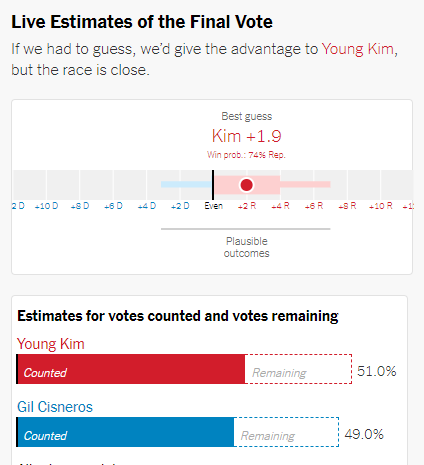