Northgard is this cleverly executed real time strategy-management-survival computer game rolled into one. It made a splash when initially released a few years ago, and as the game wasn’t terribly deep, the playerbase rush seems to have moved on. It’s not dead, though. A new faction DLC came out as recently as this month. There’s people on the subreddit. Last I checked, you regularly get matched on multiplayer ranked battles.

A work colleague introduced me to the game, and a year later I got into it. I find it a bit funny – worrisome maybe – that I became addicted to just a super specific aspect of the gameplay – geographic strategy and economy building.

The game unfolds in this northern, inhospitable island bustling with wild animals and monsters. Players, which are different Viking tribes with their own little Viking specialties, land on the island while looking for a new home and fight with each other to dominate the place. The island is divided into 40-120 hex tiles. Each tile has some resource specialty (a combination of food, wood, stone, silver and lore), which reminds me of Settlers of Catan.

One must strike a delicate balance when choosing which hex tile to expand into – as one expands, one must secure more space to build more advanced buildings, while continuing to support the growing population with adequate levels of food, firewood and income. The more tiles you occupy, the pricier becomes the next tile you expand into, so there are multiple factors to consider.

Now, on the vanilla map resources are relatively plentiful. So once a player gets a hold of the mechanics and economic balance, expansion is not a tricky mess. However, there is an optional map mode where the survival aspect is dialed to an 11 – the Ragnarok map. In Ragnarok, food is scarce, tile monsters are stronger and aggressive, there are periodic natural disasters that will hit players behind their front lines, and there is a new NPC faction that will regularly ambush attack players with a force strong enough to annihilate multiple tiles worth of civilians if the player does not respond with an armed response.

When you dial up survival difficulty to hardest, if you don’t carefully calibrate your economy, the first or second winter or an unexpected monster ambush can be the end of your tribe. It even sometimes happens to computer-controlled factions.

I’m turned off by messy, spiraling back and forth skirmishes. I suck at micro control. So whenever I go head on at enemy player tribes or even computer players, I would often lose. But facing nature before meeting players was super fun. Will this tile expansion mean that I will continue to generate enough food for the next expansion? Should I steer towards wood production for this expansion? Will my workers survive the adjacent wolf den? So many factors to consider.

So to maximize this aspect of the gameplayer, I have been playing all my Northgard games on this setting: Ragnarok, harshest survival difficulty, biggest map (fits 7 players) but only place 3 players total including me to force players to deal with nature and not with each other until very late into the game. Domination only. And every time, I have played with the Stag clan. (the clan with the biggest economy-building bonuses)

Playing in this mode, every time, I repeat the same routine:

I have 770 hours doing this for the past year. I have no idea how this super repetitive, methodical gameplay has not turned boring. I find the initial phase of geographic strategy super exciting and engaging. Every time I play.

One reply on “Repurposing a game” 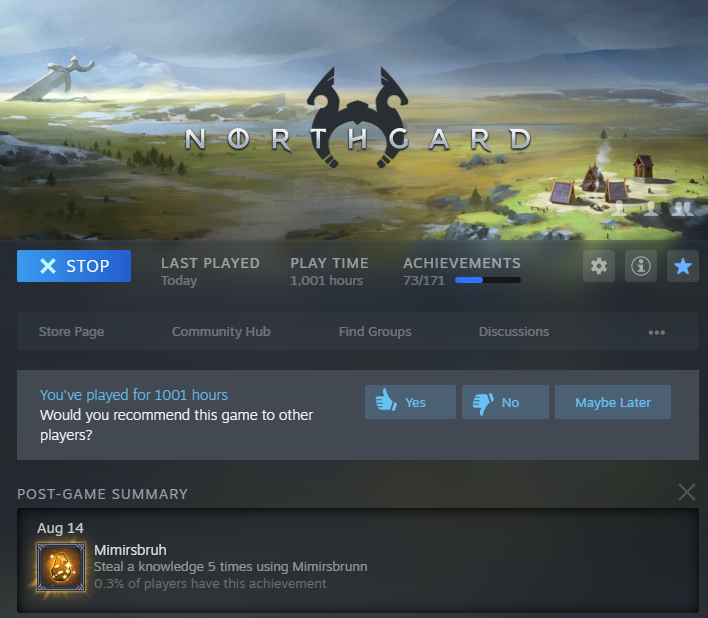