Addressing this question from HelloTalk:

What does “patchiness” mean in this passage? Is there a similar word in Spanish?

I often see people use double quotes on an expression when the writer is grasping to find a word that precisely describes the writer’s intended meanig.

In this case, however, it’s easier – there is a semicolon, and the flow of the sentence shows us that what follows the semicolon is the definition of the word “patchiness” as intended by the writer. “an environment that varies from place to place”. However, interpretation of the overall sentence reveals a contradiction, which is puzzling:

A. Ecologists think that stability comes from “patchiness”, not from diversity

Isn’t the concept of an environment that varies from place to place (B) very close to the idea of a diverse environment(A)? What’s going on here?

Maybe the writer is trying to differentiate between what we would usually imagine when we think environmental diversity (just things being different and varied all over the place) with “patchiness” – possibly the overall environment having multiple, smaller areas within – these smaller areas are uniform internally, but each area is different from other areas. This concept also nicely aligns with the visual image of patches of cloth. You have worn jeans, and patch it up with a square piece of cloth. Now imagine a jean made up with many patched pieces of cloth..

I can also think of another concept that is similar to this – when people describe urban landscapes, an interesting concept is the idea of “microneighborhoods” – the idea that there are neighborhoods, just a couple blocks wide, each being pretty homogenous within each microneighborhood, but wildly shifting in demographic makeup, architecture, and mood when moving to another nearby microneighborhood.

Northgard is this cleverly executed real time strategy-management-survival computer game rolled into one. It made a splash when initially released a few years ago, and as the game wasn’t terribly deep, the playerbase rush seems to have moved on. It’s not dead, though. A new faction DLC came out as recently as this month. There’s people on the subreddit. Last I checked, you regularly get matched on multiplayer ranked battles.

END_OF_DOCUMENT_TOKEN_TO_BE_REPLACED

I’ve been experimenting for about a year with using a tablet to read ebooks while on the elliptical at the gym. At first, I was using the 12″ Surface Pro. The Kindle Windows program didn’t make the font big enough, so instead I used the browser-based Kindle Cloud Reader because Chrome allowed for a much wider range of zooming in beyond Kindle’s built-in font zoom. The fact that the screen was so big was nice, but because it was so big, I couldn’t lug it around while doing weights. So my routine was going to the gym and throwing stuff into the keyless locker (as it’s closer to the ellipticals than the locker room padlock lockers), doing ellipticals, then weights, then pulling the tablet out and doing the final stretch of ellipticals or other cardio.

Reaching to the tablet to touch the screen to turn the page breaks the workout flow. Also, at this level of zoom, you have to turn pages a lot. So I got a bluetooth clicker. I settled for the Logitech R500, which has a much thicker body than other models and makes it easier to hold on without dropping while while also holding on to the handlebars using some of the fingers. Also, both the “Next” and “Back” buttons are very big and there is none of the useless extra stuff that other models have. Other than not allowing me to fully grab the handlebars (holding on to the handlebars comes in handy especially when I start jumping), this was a pretty good setup. It also worked well with the Aladdin Ebook Reader for Korean language books.

END_OF_DOCUMENT_TOKEN_TO_BE_REPLACED

I submitted a witness statement to the city regarding what I saw happen at the April 4 WCKNC election for multiple people filing election challenges.

The following information contained herein is within my own personal knowledge and relates only to facts and circumstances surrounding the Election Challenge submitted by _____________ on ____________ regarding Wilshire Center-Koreatown Neighborhood Council.

My name is Yongho Kim, and I live in the Wilshire Center-Koreatown Neighborhood Council (WCKNC) District 4. My mailing address, 900 Crenshaw Blvd #B, Los Angeles CA 90019, is my workplace where I can receive mail reliably. On April 4, 2019, at 5:40pm I voted at the Los Angeles Neighborhood Council elections at the at the polls at Seoul International Park.

END_OF_DOCUMENT_TOKEN_TO_BE_REPLACED 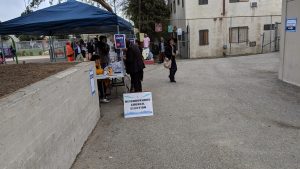 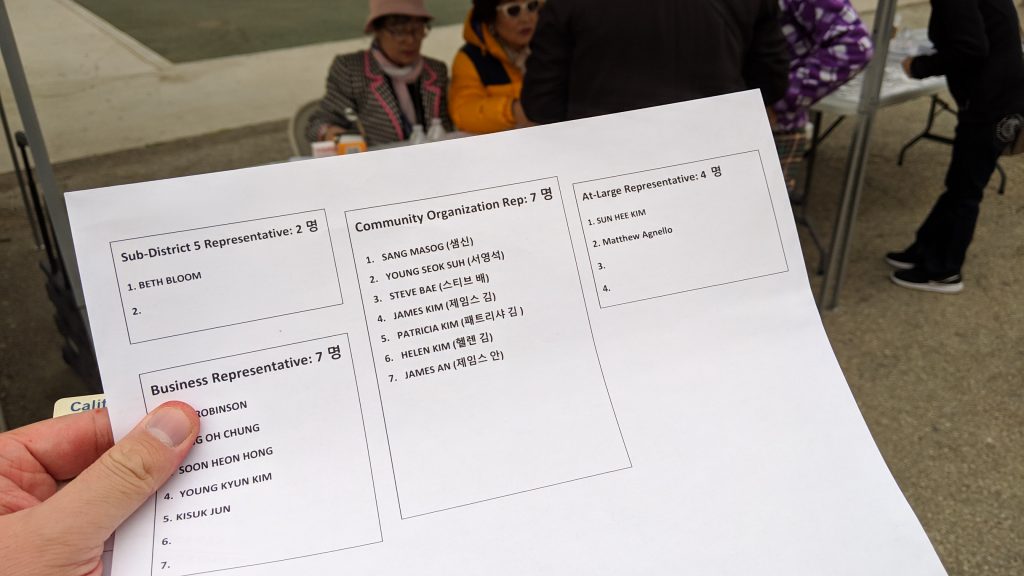